I try to use my art for good.

My creativity go-to guru, Neil Gaiman, has espoused the mantra ‘Make Good Art’. I’ve turned it around to create my own slogan: ‘Make Art Do Good’. (He would probably put it grammatically better than I just did ;)

Incidentally, I used that Gaiman-ism on a card that is available at my Etsy store, the sales of which benefit Hunter Animal Rescue. Other charitable items are dedicated to Red Cross, UNHCR, Cancer Council Australia, Look Good Feel Better and World Vision, to name a few. Check out my full range of my fund-raising campaigns here.

I’m not mentioning this to big-note myself. Obviously, I hope someone will read this and decide to give generously (I applaud you forever if you do!) I simply figure that if I’m going to create art, I should produce something with a greater purpose than to just be a ‘pretty picture’. (I’m not knocking pretty pictures, btw; and to be honest, most of my works have a greater purpose than ‘look pretty’ anyway – Scott McCloud would probably call me an animist)

But I like to think that I can use my art to benefit somebody other than myself, to support causes that I believe in. It’s probably as close as I’ll ever get to having a superpower.

Some people may ask: ‘Why are you asking us to buy your stuff? Do you skim some off? If you really mean it, why don’t you just give to charity outright?’ No one has ever asked me this outright, but I wonder if anyone has ever thought it, seeing what I do. Well, I’m not made of money; I can admit that I barely scrape a living together on freelance commissions. Drawing something to benefit a cause takes time that I could have spent on profitable work (or looking for profitable work, more often than not) so it’s probably losing me money in the long-run.

But I still do what I can, giving a fair chunk of my own earnings to charity every year. Doing fund-raising drives like this allows me to give more than I could afford on my own; and what little I ‘skim off’ just manages to cover my production costs, with the meagre amount is left going back into either my own career, or yet more charity drives.

I don’t do it because I wish to draw attention to myself, either. (lesson #1 of freelancing: NEVER work ‘for exposure’!) I do it because I genuinely believe in the causes I support, and want to make whatever difference I can, however small.

I get inspired by all kinds of things, for all kinds of causes. For example, in the wake of the Nepal earthquake, I created fan art of the classic Belgian comic The Adventures of Tintin  – since the titular hero went to the aid of a friend in Tibet, I can easily imagine him going on a rescue mission to the site of a disaster just over the border. Funds raised by sales of the prints go to World Expeditions (formerly Red Cross; their Nepal appeal has since ended).

That brings me to someone else who had close associations with Tibet – one of the most inspirational figures in my life, a man who forever commands my undying admiration: David Bowie.

I can’t begin to say how much this man means to me. I’ll end up saying far too much, and yet too little. But here goes.

I first noticed him giving a tv interview in 2003. He wore a tight silver suit, effortlessly charmed the live audience, and completely bamboozled the interviewer by randomly pulling his own sunglasses out of a bowl of lollies. I was instantly fascinated by him: how he walked, what he said, the way he tipped a sly wink to the audience. I was head-over-heels as quickly as that.

I still love to watch his interviews from the late 1990’s/early 2000’s, looking for glimpses of the David Jones behind the Bowie persona. Dull journalists beware – if he got bored, he’d entertain himself by mercilessly messing with them! When he found a worthy conversant, he’d expound upon art, philosophy, conspiracy theory, spiritualism, mortality. His knowledge and keen interest in everything was intoxicating. I could almost feel my mind expanding as I took in all he had to say, all he stood for. He introduced me to Bernard Pommerance’s play ‘The Elephant Man‘, which is still one of my favourite books; I’m sure my reading it somehow changed me irrevocably.

Of all the things that made him so wonderful – his music, his style, his art, his incredible talent for re-invention – the thing I still love best about Bowie is his personality. He was witty, funny, charismatic; fiercely intelligent, worldly, considerate. Everyone who knew him recalls that he was a lovely, personable, gentle man.

He was a fascinating creature. There will never be another remotely like him.

I had tried to draw him before, but was always dissatisfied with the results (you can see my lacklustre efforts on deviantArt). I was going to draw something to commemorate his 69th birthday this year, and the release of Blackstar; but for some reason, I just couldn’t get onto it. Maybe I had an inkling of what was to come, though his death a few days later completely blindsided me. I’m still coming to grips with it.

I’m glad I hadn’t made any marks on paper yet. I could create a proper tribute to him instead.

Left, my Blackstar portrait of Bowie; a final homage. I also did a drawing of his Labyrinth character, Jareth, back in 2009, that I was quite happy with. Both are available as prints/cards at my Etsy store, with 70% of funds raised going to Cancer Research UK.

I still have so much trouble drawing his face. Like everything else about him, it is iconic, yet difficult to capture and define. I’m not sure if my portrait is a good likeness or not (I wasn’t really trying for the Jareth one), but it’s how I see him.

I’d love to draw the late 2000’s Reality version of Bowie, which I think of as *my* Bowie, with the tree branches from the ‘Disco King’ film clip behind him. In fact, I’d like to do a whole series of Bowies from different eras. If I find the time and inclination, I’ll do them.

And I have a somewhat longer-lasting connection to David Robert Haywood Jones, in a way: my own Diamond Dog, a labradoodle named Bowie.

I wonder if he’d like that sort of legacy? I rather think he would. As far as I can tell, he was a dog person. And there is a fleeting resemblance… 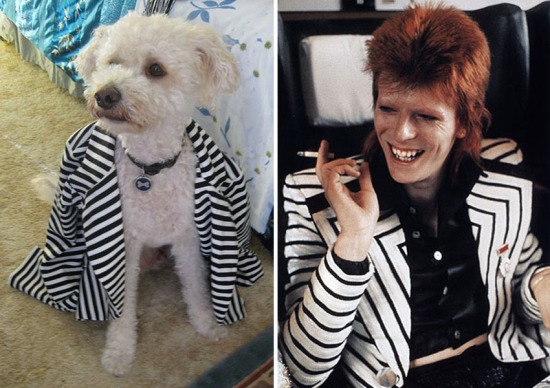 As for future fundraising campaigns, next I’d like to do something for All Out, the international gay rights movement that I support. I feel very strongly about marriage equality; I can’t believe we still don’t have it in this country, in this day and age. A lot of the stories I write and projects I work on have a strong LGBT-friendly leaning. I’ll have to profile one such project in a future post, sometime soon. Stay tuned.