It’s been a while since I’ve posted anything, sorry about that. Between various projects, house renovations, and the miscellaneous minor tasks that come with being a freelancer (besides all the background tv, books and junk that tend to distract me at all times), I lost track of how long it had been.

This is more a public-service announcement than a blog post.

Towards the end of last year, BBC Radio did an audiobook production of the Neil Gaiman short story ‘The Truth is a Cave in the Black Mountains’. (I went to see Neil at Sydney Opera House when he was out here, performing the story for the first time – not the actual reading, but the panel discussion with Shaun Tan and Eddie Campbell afterwards. I met him in person – he’s really, really nice!)

BBC put out a request for people to draw something while they listened to the audiobook. I submitted the piece above, got a nice email from a BBC person about it, and it was featured as a promo on the official BBC Twitter page, which was pretty cool.

I thought I ought to do something with the artwork, so I’ve made it into a bookmark which is available for sale at my Etsy store; $2.00 of proceeds go to White Ribbon, a charity that supports women who have been victims of violence (which, when you look at what I’ve drawn, and if you know what happens in the story, seemed like the right kind of cause). 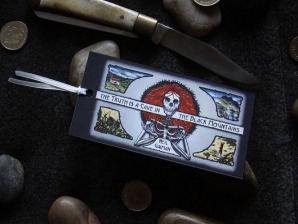 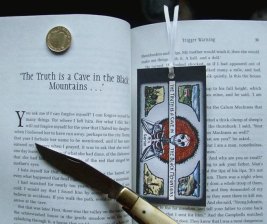 There’s been a lot of incidental Gaiman in these blogs. I really should devote a proper post to him, sometime.